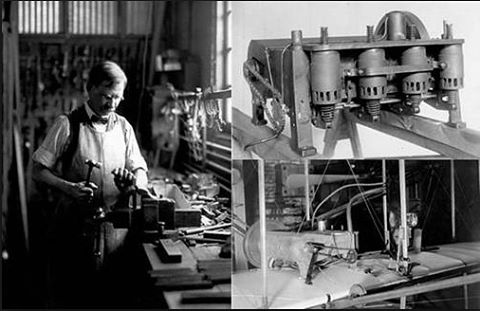 Without Charles Taylor, we probably would never have heard of the Wright Brothers. Orville and Wilbur Wright hired him in 1902 to work in their bicycle shop. After working for the Wrights for a short time, he was asked to build an engine for their flyer. All of the engine contractors that the Wright brothers had contacted said that what the brothers needed for their flying machine was impossible to create. They needed a gasoline engine weighing less than 200 lbs. and producing eight horsepower. The Wrights asked Taylor to work on the engine while they continued to work on perfecting the aerodynamics of the flyer. Taylor’s experience with engines had been limited to an unsuccessful attempt at repairing one. He ordered a local foundry to produce the crankcase from aluminum and the flywheel from cast iron. When he finished his work on the engine, it weighed a total of 156 pounds and produced twelve horsepower. Just a few months later, this engine would power the 56-second flight that flew the Wright brothers into the history books! – Via Jacopo Romei (source)

Lessons I learned on development

A lot of good lessons learned by a developer. Maybe obvious, but looks like not learned enough by many of us. A refresher never hurts.

Working Remotely in Cafes and Possibly Even Surviving

Alternative titles: Retaining Your Humanity While Working in Cafes, or possibly How To Have Your Coffee and Eat It Too, or even the tried and true There’s So Many Damn Weirdos Leeching on the Wi-Fi.